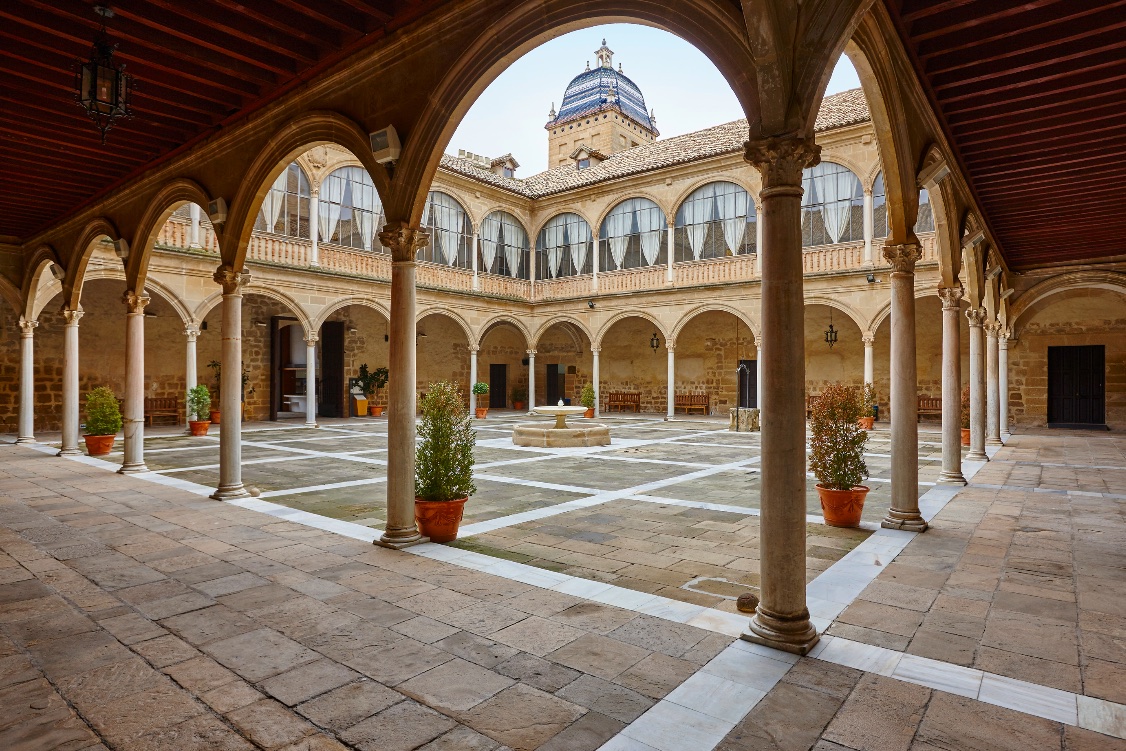 The so-called triangle of the Andalusian Renaissance is located between three municipalities of Jaén: Úbeda, Baeza and Sabiote, important witnesses of the greatest exponent of the Spanish Renaissance. The impeccable conservation and restoration of its buildings, especially in Úbeda and Baeza, has made them World Heritage cities.

An element of union emerges between these municipalities, creating a triangle that includes 16 kilometres from one vertex to another, and it is its rich Renaissance heritage, in a sober and Castilian style, created by the famous architect Andrés de Vandelvira.

Several civilizations occupied these lands, leaving their mark there, such as the Muslim and Jewish vestiges with their narrow and cobbled streets. Its importance and maximum splendour are acquired after the Christian Reconquest, back in the 16th-century, when aristocratic families settle in these cities, especially in Úbeda to make it the Renaissance capital par excellence.

Visits to get to know the Renaissance Triangle are already justified, but, in addition, you can enjoy its natural environment: beautiful landscapes made up of the Sierra de Cazorla, the Guadalquivir Valley, Sierra Mágina and its extensive fields of olive trees with their oil mills.

Taste its rich and varied gastronomy based on the delicious star product of the area: extra virgin olive oil.

Typical dishes of this Renaissance triangle are: pipirrana (vegetable salad), andrajos (rabbit and potato stew), morcilla en caldera (black pudding without stuffing, sautéed with local vegetables), etc.; In confectionery, the sweet hornazos with boiled egg, and the ochíos made from flour cakes and matalauva (anise herb) are famous, among others.

What to see in each town of the Renaissance Triangle?

Currently, thanks to the collaboration of the Junta de Andalucía and the Diputación de Jaén together with the brotherhood between these three Renaissance enclaves, there is an incipient growth in tourism. Hotels, such as YIT El Postigo Hotel, offer the best opportunities and provide very good services to be surprised by the Renaissance Triangle.

Úbeda, one of the jewels of the Renaissance Triangle

At the entrance of this city, considered the oldest city in Western Europe and known as "the city of the hills", stands the majestic Hospital of Santiago, in other times a place to cure lepers and today the Palace of Congresses and Exhibitions, as the masterpiece of the master architect Vandelvira.

With a sober façade, inside it shows a luminous patio with columns and a beautiful chapel. It is popularly considered "El Escorial Andalusian". From the wall that surrounds the historic quarter, the most privileged views of the great natural heritage of the area are contemplated.

In the Vázquez de Molina Square there are great Renaissance examples: The Church of El Salvador, with its magnificent plateresque portals, houses its Sacred Chapel. A purely Renaissance space, designed by Diego de Siloé and executed by Vandelvira commissioned by Francisco de Cobos.

Next to this sanctuary is the Condestable Dávalos Palace, today converted into a tourist hostel, with a beautiful façade and a large patio with a double gallery of superimposed arches.

Juan Vázquez de Molina Palace or Chains Palace is today the seat of the City Council. The patio with marble columns that support semicircular arches stands out from this building next to the wooden coffered ceiling of the Municipal Archives.

On one of the sides of this square stands the Basilica of Santa María de los Reales Alcázares. Although its construction began in the Muslim era, a beautiful superposition of styles can be seen in it. It is a monumental building with five naves, several chapels and a fully Renaissance cloister that bears witness to the cultural flow of Úbeda.

The Palace of the Marquis of Mancera completes the setting, and is also an example of great Renaissance purity.

In 1st of May Square, popularly known as Market Square, is the Gothic-style Church of San Pablo with Romanesque reminiscences on its façade. Inside is the Chapel of Los Vagos as a splendid work of the Renaissance. Opposite it is the Old Town Hall, which was a Renaissance palace, and nearby is the San Juan de la Cruz Oratory.

Bordering Úbeda, it shares the monumental Renaissance legacy and the views of nature. Baeza houses one of the headquarters of the International University of Andalusia.

Its Renaissance past is shown in some chapels of the Cathedral of the Nativity of Our Lady, despite being built on a Visigothic temple and later on a mosque. In the same Santa María Square are the Gothic Chancelleries or High Town Halls, which were the town hall of the municipality until the s. XIX.

The Fountain in the center of the square and with the same name commemorates the end of running water works in the city.

The San Felipe Seminary has certain reminiscences of the Renaissance.

To the north of the previous monumental complex and next to the Barbudo Gate, the traveller will find the old Santísima Trinidad University, of which the central cloister and a large chapel with a marked Renaissance character stand out. The facade shows a large medallion and coats of arms of the donor of the building (the canon Fernández de Córdoba).

In the Santa Cruz Square is the church of the same name and in front of it the Jabalquinto Palace, one of the most emblematic of Baeza.

Other palaces and mansions in Baeza also show their Renaissance past: Avilés House, Galeote’s House and Ávila’s House.

To the north of the city is the Pópulo Square or Los Leones, with the Villalar Arch as a commemorative element of the victory in the battle of Villalar and the Pópulo House, now a tourist office. Opposite, La Antigua Butcher Shop now houses courts.

The Fountain of the Lions presides over this monumental square in Baeza. To the south side of the current Spain Suare is los Altares Towers, where the public clock has been placed, and La Alhóndiga.

To the north of this square are Consistoriales Bajas House or Council Balcony, from where the municipal officials watched the festivities.

On the northern side of the square is the Chapel of the Old Hospital of the Purísima Concepción, the Convent of Saint Francisco and the ruins of the Benavides Chapel, today the funerary chapel of the artist Vandelvira.

Located in the highest part of the fluvial plateau that makes up the Guadalquivir and Guadalimar rivers, this municipality of Jaén rises up from the Renaissance Triangle. Although it is considered the little brother of the Renaissance triangle in Andalusia, it is not without its own charm.

In its well-preserved and cobbled streets, we find houses and mansions emblazoned with a beautiful Renaissance appearance.

Remarkable monuments are the parish church of Saint Pedro. Rebuilt by a disciple of Vandelvira (Alonso Barba), it has clearly Renaissance vestiges from the hand of the master.

Sabiote Castle has a marked military character, with pentagonal towers at an angle, embrasures and loopholes copied from Italian military architecture. In this building, its great façade of Renaissance masonry stands out with the coats of arms of its founders, and its palatial and Renaissance interior is distributed around several patios. This fortification has been declared a Monument of Cultural Interest since 1931.


Stay at our hotel in Úbeda and plan your tour of the magnificent and little-known Renaissance Triangle. Make the reservation on the website and get a 5% discount.